It's January 27 2018 and it's our last day!  We're off to the Mount of Olives (click) for our first stop.  This is the place to get the best photos of the Kidron Valley and the Temple Mount. 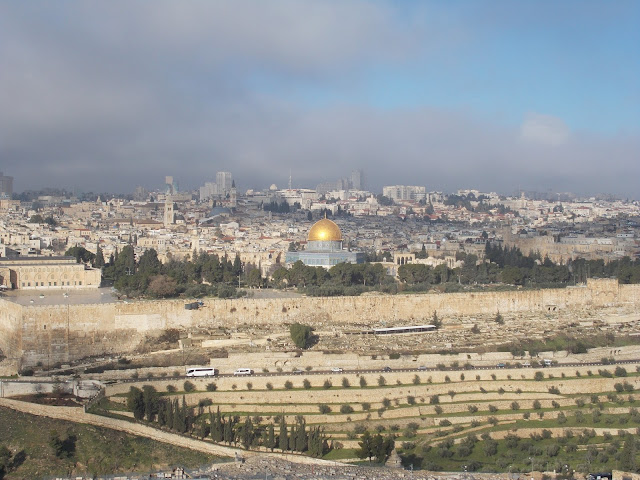 After many pictures and the tourist stuff (like a picture with a camel) we headed down the Garden Path to the Church of All Nations (click). The church is next to the Garden of Gethsemane and enshrines the rock that is believed to have been used by Jesus to pray on the night before his crucifixion.

We then traveled across the street into the Garden of Gethsemane.  Payment and appointments are required in order to see it (our guide Doron set it up).  We had a devotional time, sang and then had personal prayer time in the garden.

We then were met by the bus and went out side the city of Jerusalem to Herodium.  This is another palace built by Herod the Great.  It's approximately 7 miles from Jerusalem and when it was being built, Herod wanted to be able to look out his palace window and see Jerusalem.  His engineers informed him that the mountain was not high enough in order to see Jerusalem.  Herod then instructed them to use the mount next to it and make it high enough!

Our last stop was the Garden Tomb which is an alternate site for the Holy Sepulcher (stone room to bury the dead). Holy in that the sepulcher was were the body of Jesus was placed. The Bible tells us that Joseph of Arimathea gave up his sepulcher to be used by the body of Jesus.  There is also a rock face which depicts a skull as it was described in the gospels as Golgotha which means the place of the skull.

We finished the tour with a communion service!  Our Israel journey is now over and we return to Canada tomorrow.  Shalom!